Burberry takes center stage on Snapchat. Many fashionistas were glued to snapchat’s live event for New York Fashion Week, hoping to take a glimpse of their favorite designer’s show. But in London, Burberry stepped it up with Snapchat by having their own live event.

By having their own live event, Burberry did not have to compete with other shows. Additionally, they controlled all the content, which I’m sure is every brand’s dream to have total control. The brand shared their rational behind choosing a bold red lip for the runway, showed up off Optic white nails, and took fans to the rehearsal. 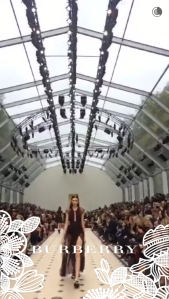 Burberry gave a complete branded experience on snapchat. Snaps taken by the attendees had the choice of different Burberry branded get tags. The snaps added to the live event correlated perfectly with the flow of the show. And Of course, the ads included in the story were Burberry.

Burberry made a great move with SnapChat and having their own live event. With their live event they didn’t get lost among the other brands during London Fashion Week. They took this opportunity to own the space and gain potential new fans.